For many process engineers and manufacturers, there are two vital areas in the production cycle that require close attention; process safety and product quality. In both cases, accurately measuring and controlling oxygen levels in tanks and process vessels is paramount. This success story explores how an analyzer-based oxygen measurement inserting system enabled a manufacturing plant to advance process safety, improve product quality, and increase production yield.

A large international chemical manufacturer’s plant, located in Detroit, MI produces a specialty catalyst used in the automotive industry. Production requires a unique, proprietary process that introduces several components into a large bulk tank and mixes using solvents. Some of the components of the mix, including the solvent itself,
are flammable, presenting the dangerous threat of combustion. Numerous mitigation techniques have been implemented, particularly a pressure inerting system, in an effort to maintain process safety. This technique used a pressure valve to control the amount of inerting gas introduced into the vessel’s head space based on pressure changes. Although the pressure inerting system worked sufficiently for a few years, it lacked two invaluable components needed by the plant and was no longer a viable solution. First, was the need to accurately measure and document that the appropriate amount of oxygen had been removed from the headspace in order to maintain levels below the combustible threshold, thus rendering the vessel inert. Second, was the ability to modify the system to increase the flow rates of the various chemical components making up the mix. The goal was to speed up the mixing vessel loading process, and therefore increase catalyst production. Due to the success of the manufacturer’s product in the marketplace, demand had increased, and the production rate was suffering from the bottleneck created at the mixing tank.

Plant safety engineering had determined that in order to avoid static electricity build-up and accumulation in feed lines, the volumetric feed rate had to remain low. This rate was far lower than what the system was capable of producing from a mechanical perspective. Without accurate measurement of oxygen levels needed to maintain safety thresholds, the risk was too great to increase feed rates any further. Thus, the bottleneck was created.

Tasked with devising a technique that could remove the bottleneck and improve production yield, a group of plant engineers sought a solution. The team resolved to move forward with an oxygen analyzer-based nitrogen inerting control system. The first step in the project was to determine the maximum permitted oxygen concentration they needed to stay under, as inerting systems aim to maintain oxygen levels in the headspace of the tank below a regulated level.

Proper measurement of oxygen is imperative as most data available in manufacturer’s tables used for the calculation of limiting oxidant concentration (LOC) or maximum oxidant concentration (MOC) and upper or lower flammability limits (UFL/LFL) for various chemicals compounds is empirical. This means that the data is inexact, and some margin of error can be expected. The National Fire Protection Association (NFPA) has addressed this in their guideline 69 and established safety factors that remove the uncertainties and errs on the side of safety.

Once a maximum oxygen concentration target was established, the team began evaluating flow rates of raw material supply lines in the system. By raising the feed rate of different lines, they established precise productivity increase allowances while maintaining oxygen below the permitted maximum. Excitement rose as the data determined that material throughput to the mixing vessel could sufficiently increase at an approximate rate of 2 ½ times without compromising safety; confirming value in the proposed introduction of a complete oxygen analysis system. Additionally, the data generated by the oxygen analyzer can easily be fed to a PLC and stored for tracking purposes. This is invaluable for troubleshooting and documenting safety compliance when needed.

The use of an analyzer-based oxygen measuring inerting system proved to be a win-win for the customer. It allowed them, first and foremost, to ensure safety was always maintained by keeping oxygen levels below the necessary threshold to greatly reduce the risk of combustion. In addition, the customer achieved its goal of increasing production rates by more than double, which had a significant positive impact on their revenue. Finally, it created the opportunity to generate and document data records needed in the event of a safety audit. 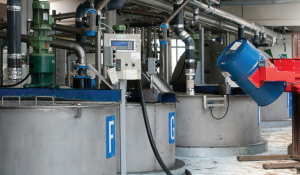 Via MSA The Safety Company How to Help Prevent Heat Stress in Industrial Work Environments